Don’t let the costume companies influence how you dress for a 70’s party man. What men really wore in the 70’s was often a far cry from what they would have you believe.  It certainly was not all bell bottoms and fro’s. The majority of pants were boot cuts to slight flares, in polyester blends & knits: It does seem there is something in modern food though, every guy in 70’s ads had fabulous hair! WTF happened to us? We are way buffer today though in general, the average 70s man wore a size medium and we have worked very hard at DressThatMan to secure lots of vintage pieces for the XL Man. We believe we have the largest selection of XL and above 70’s mens shirts for sale in the world. 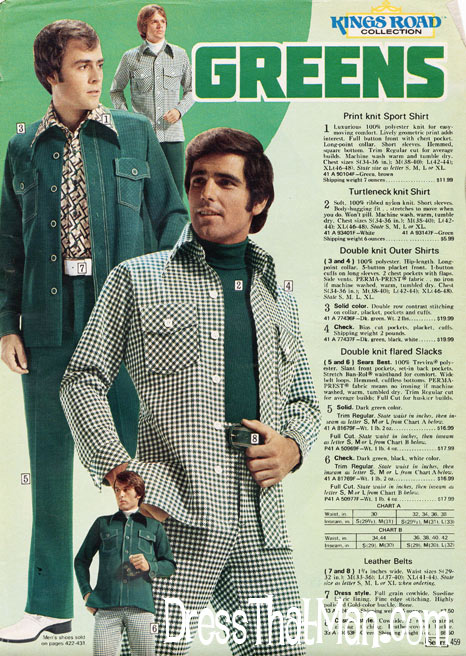 We have been in business providing costumers and individuals who want 70s mens clothing since 2004. So peruse our virtual racks and pull some pieces that will ensure you are the best dressed man at any 70’s event! Groovy or classic – as long as you feel good enough to strut your stuff, it’s all good cool man… More cool stuff that you missed out on…. Sold bu

Get your priority mail order in by 9 am (Eastern Standard Time) during regular business hours (excluding holidays) Monday through Friday and it will ship the same day! Get your FedEx order in by 10:30am EST for same day shipping (Monday -Friday)